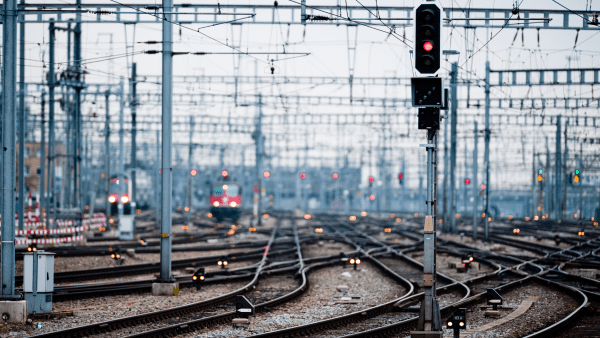 A blog by John Dinan, Field Applications Engineer at LeddarTech

There’s a very large detection technology stack that can be used for a wide variety of applications in the railroad industry. These technologies, of course, have all their strengths and weaknesses. The goal is to integrate the one that makes the most sense commercially depending on the targeted application.

Let’s start with an overview of what sensing technology is most commonly used to monitor railroads these days, and some of the shortcomings that go along with these technologies.

First, there are a lot of intrusive technologies, as we call them, like ground loops (wire coils) or magnetic pucks that are in the track or placed on the rail. These are very good at identifying trains and they’re inexpensive. However, they are intrusive in that they need digging to pass wires for the communication and to pair the installation. Also, the wires or pucks can be ripped for several months every winter and are prone to failure. Simply put, monitoring thousands of level crossings using this technology is not practical nor robust enough.

Then, there are the non-intrusive technologies. For example, cameras, which can be used to monitor any activity that may occur on the railroad: the presence of cars, pedestrians, etc. Cameras are very inexpensive. However, what’s difficult with cameras is the processing of the data, as a human cannot monitor all the rail activity based on camera images. An alternative would then be to have artificial intelligence (IA) that does all this processing, but then the price tag of these cameras will reach several thousand dollars. Otherwise, if you would want to build this system in-house, you would need ultra-specialized teams to build the AI. So, depending on the application, it could make sense or not. Another problem with cameras is that people generally don’t like to feel like if “Big Brother’s watching them” and, instead, most would rather be monitored by sensors that can keep their anonymity.

Another common sensing technology is radar. Radar is very good at detecting large masses and detecting metal surfaces. So, it can be very efficient to detect a passing train, but the challenge with radar is the identification of what’s being detected. A radar can hardly make the difference between rolling garbage, a passing train or even a human. In some applications this is acceptable, but in a more dynamic environment or if detected objects need to be classified, it doesn’t work as well.

Another non-intrusive technology is GPS, which is very efficient and has just a few limitations, such as in tunnels, where you lose signal. GPS can essentially do one thing: track the displacement of the train or, more specifically, its ID. The challenge is that all the data that is associated with the tracking or identification has been manually input and the hardware needs to be installed on every train that needs to be tracked. In short, it’s easy to track a train using GPS, but GPS is hardly scalable to track all the individual wagons with their type and size. So, a train can be properly tracked on its path by the GPS, but the GPS might believe that there are 25 cars behind while in reality there are 150…

Finally, there is LiDAR, a remote detection and ranging method that works much like radar, emitting infrared light pulses instead of radio waves and measuring how long they take to come back after hitting nearby objects. The time between the output laser pulse and the reflected pulse allows the LiDAR sensor to calculate the distance to each object precisely, based on the speed of light. LiDAR captures millions of such precise distance measurement points each second, from which a matrix of its environment can be produced to obtain Information on surrounding objects’ position, shape, and behaviour.

Let’s now look at specific railway applications where we could see LiDAR technology being deployed. These applications leverage solid-state LiDARs such as the Leddar Sight, a 2D, solid-state (i.e., with no moving parts), very sturdy sensor that uses non-intrusive technology. These LiDARs provide distance measurement feedback and can build a very precise shape of the object in 2D in order to do profiling (with the sensor placed at the right angle).

First, 2D solid-state LiDARs can be used for rail-switch protection. There’s the railyard, where the rail cars or locomotives are stored. Railyard shunting is when a train goes down the tracks and the whole train is being assembled by adding various cars. While this process is underway, the shunting areas can be monitored to make sure that the cars are not stuck between the switch points. For example, let’s take a railroad switch that separates the arriving track 1 into either lane A or B, lanes A and B being parallel to each other. If a train is already passing from track 1 to lane A and the railroad switch activates the passage to lane B, the train will then have part of its wagons on lane A while the rest of the wagons will be derailed onto lane B. This will either rip off the railroad track and the railroad switch or even cause wagon derailment. However, with non-intrusive LiDAR technology, a sensor can be placed a few meters away from the rail car, replacing pucks or wires that risk being torn apart every year.

Then, there is autonomous train shunting. For example, if you’d like to have a train that could run autonomously and build itself on its own, sensors could be installed on each rail car that would detect the distance between each car, so the locomotive knows when to accelerate and decelerate to do the building of the train. This would likely be more suitable for passenger railcars. Lidars could also perform “presence detection” to know which track is full and which is empty. These represent interesting value-adding automation opportunities.

Solid-state LiDARs can also be used to ensure the safety of operators on railway tracks, especially workers who do maintenance or monitoring. Usually, there will be an operator around worksites whose sole job is to watch if a train is coming. When there’s a curve, this can be made more difficult because of limited visibility, while a freight train can take kilometres to stop! In these situations, installing one LiDAR on a tripod at each end of the worksite (or at each end of a curve) linked to an alarm system that would go as soon as a train is detected would alert the workers so they can safely go off the track.

Collision avoidance between rolling equipment or rail cars that are moving at low speed, meaning less than 50 km/hour, is another use case where 2D LiDAR technology can be used to alert the driver that there’s an obstacle in the train’ path. The LiDAR specifications and performance will need to be aligned according to the specific use cases and related speed of trains. For example, there is a relationship between the range of our 2D LiDAR sensors and the measurement rate, as the faster you’re going, the more exponentially the required refreshment range is rising.

Another major issue is level crossings, as these amount to quite a big chunk of railroad accidents toll. LiDARs such as the Leddar Sight can detect if there are passenger cars, or trucks, or people that are on the level crossing. As, unlike cameras, LiDAR is not capturing an actual image of the scene, LiDAR is better to preserve anonymity and avoid potential legal considerations related to privacy.

Another problematic situation is when a freight train has cleared the level crossing but is then stopped just after the level crossing, still triggering the system and causing the gates to stay closed while traffic could be free to pass, causing useless long delays for road traffic. This is because current detection systems use wires that are passing under the track which can go 40 meters further than the limits of the level crossing in both directions of the track. The only thing these wires tell you is that there’s a presence somewhere on the track, so the gates are kept down. However, by using LiDARs to monitor the tracks at a crossing, it is possible to know exactly where the train is and if it is moving, which allows to develop more intelligent systems to determine what’s really happening and to improve level crossing efficiency.

Another application for LiDAR at the level crossing is data management. For example, some authorities or municipalities could be interested in knowing what the traffic is, including how many trucks or cars are passing through the level crossing per year or month. This valuable information can be extracted from the LiDAR data for traffic management and statistical purposes.

Lastly, train tracking is another promising railway application for LiDARs. We were talking earlier about GPS application, which is tracking the flow of trains. But the GPS doesn’t accurately tell the length of these trains, nor their composition in terms of the number of rail cars or their type. in comparison, LiDAR sensors placed near the railroad will be able to capture significant value-added information on the length of the train and the number and shape of train cars.

LeddarTech’s LiDAR solutions, such as the Leddar Sight solid-state LiDAR, overcome the limitations of the GPS to be able to know what traffic is passing on a track. So, you can count, for example, a series of 120 rail cars. Based on the detected shape and length, you also know if it’s a tank car, a flatbed, a boxcar, a double boxcar, an open-top hopper, etc. Placing the sensor at the right height, you can even know if the rail car is empty or loaded or understand the volume of what’s inside. So, for example, if a coal mining operation wants to know how many coal trams have been transported out of a facility, you can count the numbers of open-top hoppers that come out, but you can also have an estimation of how full they were. That’s another application that can be very interesting to understand the composition of the freight trains that are passing by.

LiDAR is yet to be fully leveraged by railway operators, and one of the hurdles to be overcome is educating the market on what’s available and how LiDAR can be used. We hope this article helped shed some light on the possibilities.

LeddarTech is a trusted sensing and perception partner which helps its customers develop and implement novel solutions in various industries. If you’re interested to discuss your challenges and projects for railway applications, don’t hesitate to reach to me directly at [email protected].