BLOG POST – Not all countries are equally invested in setting ambitious goals and taking meaningful actions to encourage safe and reliable autonomous driving practices. The thoughtful approach and commitment of the South Korean government from both a local and federal level in developing regulatory policies and in the urban preparedness for the commercialization of autonomous driving is an example for other countries that have not already done so to consider.

The Guarantee of Automobile Accident Compensation Act was amended in April 2020. This amendment paved the way for any damage resulting from the operation of an autonomous vehicle to be covered by the insurance policy maintained by the vehicle owner, as opposed to the indemnification of the vehicle manufacturer, even if such damage could be attributed to a defect in the vehicle. In addition, the manufacturers of autonomous vehicles must equip each autonomous vehicle with a self-driving information recording device enabling technical investigation into the causes of an accident. Similarly, the vehicle owner is required to keep the information provided by the self-driving recorder for one year. Additionally, the country has created an accident investigation committee to determine the cause of the accident for autonomous vehicles.

The country has committed to investing 4 trillion won (USD 2.8 billion) in research and development to build cooperative intelligent transport systems and precision maps. South Korea also established seven dedicated autonomous driving pilot zones with plans to increase to at least one per province. Furthermore, the country has a long-term goal of transitioning to negative zones wherein all areas can be used for autonomous vehicle testing except those marked negative. In the shorter term, the government will designate exclusive lanes for autonomous vehicles on highways by the first half of 2023 and a real-time communication system. By 2030, the government aims to have developed a detailed precision map of roads and traffic on major roads with real-time updates. 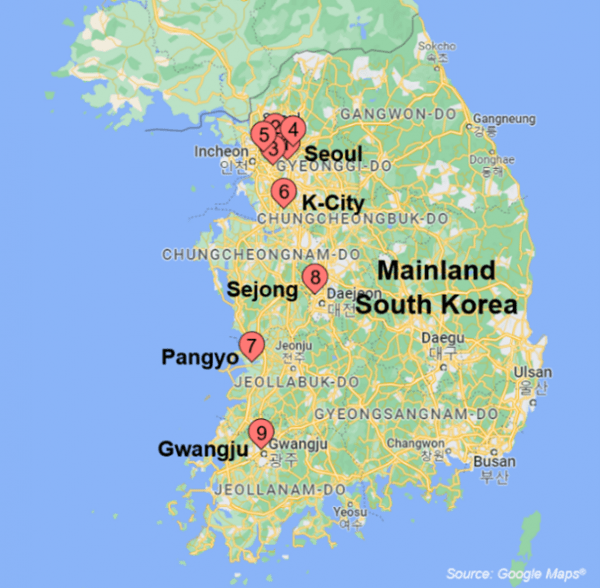 Seven dedicated autonomous driving pilot zones have been created since 2017 to allow autonomous vehicles’ testing in a real-world environment, with plans to add more zones. The existing pilot zones are in the following places:

There are further discussions to add the Cheonggyecheon area in Seoul in late 2022 or early 2023 to the pilot zone and to add Sejong city as well.

Hyundai’s RoboRide (robotaxi) was launched in July 2022 in Gangnam, demonstrating Level 4 technology with a human driver seated to take control under emergency conditions and in school zones. The robotaxi service operates from 10 a.m. to 4 p.m., from Monday to Friday, with up to three passengers per ride, and is connected to traffic lights.

The country’s auto giant Hyundai is expected to start selling Level 3 technology on its flagship model Genesis G90, but the country lags in testing Level 4 autonomous vehicles. As a result, South Korea’s cumulative mileage of self-driving totaled only 720,000[1] km using a fleet of 200–250 vehicles as of January 2022, as per Korea’s Automotive Driving Development Innovation Foundation. In comparison, China’s Baidu has accumulated approximately 21 million kilometers, and USA-based Waymo has collected 32 million kilometers worth of driving data1. 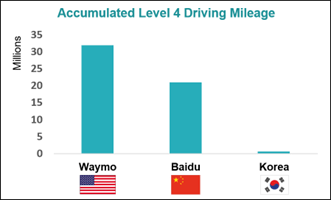 After drawing criticism from the industry and think tanks, South Korea started making noticeable strides in infrastructure, commercialization and regulations to accelerate the country’s path to an autonomous and connected future. The country made headlines by creating a new city (K-City) for testing autonomous vehicles in 2017 and again in April 2019, when the National Assembly of South Korea passed the Act on Promotion and Support of Commercialization of Autonomous Vehicles. This Act paved the way for developing infrastructure support to enable autonomous vehicle commercialization. Since then, the Ministry of Land, Infrastructure and Transport has been tasked to present a five-year master plan, providing a clear roadmap and guidelines for accelerating fully autonomous vehicle deployments in the country.