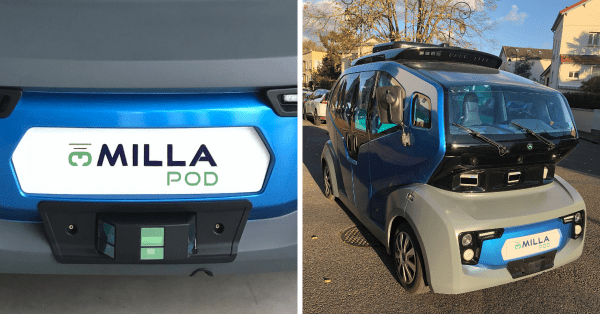 QUEBEC,November 25, 2020 — LeddarTech®, a global leader in Level 1-5 ADAS and AD sensing technology, is proud to have been selected by the MILLA Group as the supplier for their cocoon LiDAR sensor. The MILLA Group has selected the award-winning Leddar™ Pixell as the front-end LiDAR for their MILLA POD autonomous shuttle.

The Leddar Pixell is the most robust solid-state LiDAR on the market. This sensor provides a 180-degree horizontal field of view (FoV) and can offer 360-degree coverage of a vehicle when four modules are used. The Leddar Pixell offers best-in-class shock and vibration resistance meeting ISO 16750-3 requirements and complies with the SAE J1455 standard for heavy dust intrusion, positioning the Leddar Pixell for use in the industrial vehicle markets requiring robustness and durability. Also, the Leddar Pixell is IP67 certified and provides an MTBF of more than 148,000 hours, which is equivalent to ten times that of scanning solutions. The Leddar Pixell is ideal for shuttles, robotaxis, ADVs, and other off-road vehicles used in construction, agriculture, and mining applications.

“MILLA has engaged with LeddarTech on the robust Leddar Pixell for our MILLA POD. The POD is an innovative autonomous shuttle that has been deployed throughout Europe and North America,” stated Éric Gendarme, Managing director of the MILLA Group. “The radical changes we implemented in the POD related to the design lend themselves well to the Leddar Pixell; this LiDAR enables us to have a 180-degree field of view, which increases safety and overall reliability of our autonomous shuttle.” Mr. Gendarme continued: “The MILLA POD, equipped with Leddar Pixell along with the other autonomous technology components that make up our operating systems, was submitted to the RATP Group, a State-owned public transport operator operating in 13 countries and on four continents, tasked with evaluating and qualifying autonomous public transportation vehicles. The RATP reported that the operating systems of the MILLA POD, which included the Leddar Pixell, meet the stringent qualification requirements,” Mr. Gendarme concluded.

“We are honored to be a chosen supplier to MILLA Group for our sensing technology,” stated Frantz Saintellemy, President and COO of LeddarTech. “The MILLA Group represents a forward-thinking organization that tackles autonomous shuttle technology with a new and innovative approach; we are proud that our Leddar Pixell contributed to MILLA’s technical certification with the RATP Group,” Mr. Saintellemy concluded.

MILLA Group is a leading independent French company of engineers specialized in the design, development, fabrication, and experimentation of new mobility products and services. MILLA’s new mobility concept is to provide a sustainable, modular, scalable, and adaptable transporting service accessible to everyone. Since 2019, MILLA’s shuttles are rolling daily on open roads at the speed of 30 km/h in autonomous mode, a unique service on Earth. Today MILLA is the only mobility provider proposing on-demand and multi-modal transportation solutions (people and goods) for rural and peri-urban zones. The technologies implemented by MILLA Group have significant impacts also on the automotive industry. Major world-leading companies are using MILLA’s services, such as robotization and automation of vehicles and their experimentation on open roads.

LeddarTech is a leader in environmental sensing platforms for autonomous vehicles and advanced driver assistance systems. Founded in 2007, LeddarTech has evolved to become a comprehensive end-to-end environmental sensing company by enabling customers to solve critical sensing and perception challenges across the entire value chain of the automotive and mobility market segments. With its LeddarVision™ sensor-fusion and perception platform and its cost-effective, scalable, and versatile LiDAR development solution for automotive-grade solid-state LiDARs based on the LeddarEngine™, LeddarTech enables Tier 1-2 automotive system integrators to develop full-stack sensing solutions for autonomy level 1 to 5. These solutions are actively deployed in autonomous shuttle, truck, bus, delivery vehicle, smart city/factory, and robotaxi applications. The company is responsible for several innovations in cutting-edge automotive and mobility remote-sensing applications, with over 95 patented technologies (granted or pending) enhancing ADAS and autonomous driving capabilities.

Download
Return to Latest News and Media Coverage
Manage Cookie Consent
To provide the best experiences, we use technologies like cookies to store and/or access device information. Consenting to these technologies will allow us to process data such as browsing behavior or unique IDs on this site. Not consenting or withdrawing consent, may adversely affect certain features and functions.
Manage options Manage services Manage vendors Read more about these purposes
View preferences
{title} {title} {title}